After reading through Chess Praxis by Nimzowitsch, I found it easy to convince myself that his favored crooked openings, like the Dutch, Reti, or for that matter the Nimzo-Indian Defence are the most dominant openings known to man.  Even more irregular openings he would play he would occasionally acknowledge as being slightly dubious, but encouraged the reader to believe that correct chess could be found on a wide road rather than a narrow path.  The closer to the edge of that wide road you go, the more cliffs and ravines might threaten your every missed step, but the more beautiful the journey would be (paraphrasing from memory).
This got me to thinking - is there a skill level at which mainline openings are truly needed, and is any of us likely to reach it?  Our own NM Mark Kernighan plays sensible openings but will play second- or third-best variations for the sake of variety or to avoid book opening traps, knowing that the middlegame is his proprietary venue.  Class A players I have played seem to have made up their own openings out of whole cloth - perhaps they are dubious, but how to prove it in a quick game?  How many moves have I memorized that are just the latest refinement in a long series of refinements on an opening when what actually determines the winner of my games is being the person who doesn't drop a piece?
So play your Grob's, your Fried Liver attack and your Cochrane Gambit.  In a game between us amateurs, the road is wide indeed, and the view occasionally breathtaking.
posted by Ian  # 10:32 AM 2 Comments

Look twice before crossing the street

In the position below (G/30) I had been suffering for awhile so I was glad for the opportunity to break out with 1. d5!?
This turns out to be a reasonable move, though certainly not the only possibility on the board.  I didn't want to let ...Bf6 happen paralyzing my pieces, but I missed what happened next....
1. d5!? Nb4?!  2. dxe6??   (I was thinking of Bxg7, but I didn't like opening my weak g-file, and I thought I saw a counterattack)
2.....Bc5!  3. Bd4  BxB 4. RxB Qxc1+  (oops)
Interesting as well because earlier the rooks were on the c- and f- files, and I had to decide which to move to d1.  If I had chosen the other way around this would not have happened (and the Black queen was on g5 already, so this sort of tactic could have been apparent)
posted by Ian  # 10:21 AM 0 Comments

After several failed attempts, finally I can upload a picture....
In the following diagram, is White justified in pushing d4-d5, or is more preparation needed, or is another plan more appropriate?
As a bonus, evaluate the position after: 1. d5 Nb4 2. dxe6 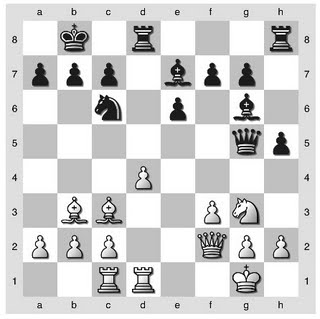 For those weak-kneed people who like the main line Caro-Kann, there is a well-annotated recent top level game at chessbase.com:
http://www.chessbase.com/newsdetail.asp?newsid=5629
Parimarjan Negi stifles our yawns and brings it home for White.
posted by Ian  # 6:44 PM 0 Comments

Some backdrop:   I was rated 1700 at that time, and I had just been playing tournament chess after a 12 year layoff for six months.  I owned two books on opening, one of which I had read, and the other I was carrying with me at the USATE, Starting Out: The Nimzo-Indian.  Coming into round 5 our team was doing pretty well, so we were playing up that round, and I knew I would have Black against a tough player.  So I tried cramming a few Nimzo-Indian lines in the hour before the game, my strategy against 1. e4 having been decided - hope and pray.  Coincidentally, I had been playing an email game with an old friend, and it was a Queen's Indian Defence, so I thought I would have a good shot of being able to play something reasonable against 1. d4.   My opponent showed up, asked my rating, and without being prompted told me he was a master (I don't ask because I have an odd tendency to let someone's rating affect my decisions.  However, against higher rated players who tell me their unsolicited ratings, I have a 1-0-2 record, so keep it up guys).   Now to business:
1. d4 (sigh of relief) Nf6  2. Nf3 e6 3. c4 b6
Time for a Queen's Indian - I had to hope my opponent would play
into the only line I knew and hang on from
there.  As it happened, he did...
4. g3 Ba6  5. b3 Bb4+ 6. Bd2 Be7  (This odd check and retreat is from theory, where the general idea is that White's bishop is better plac
ed on b2 and Bb4+ disrupts normal development) 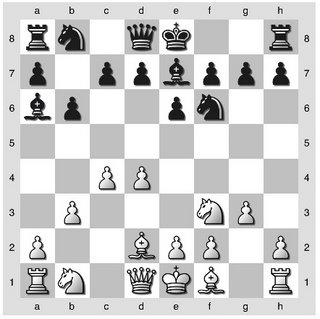 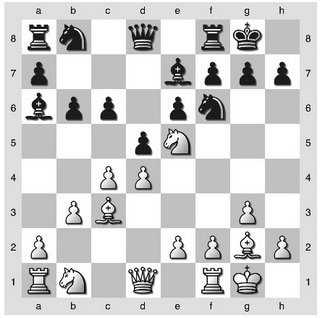 In a roundabout way we've reached a standard QID position, where theory recommends ...Nfd7.  However, we had gone past my meager opening knowledge, so the games begin...
10....dxc4?   Ugh.  There goes my foothold in the center.  From now until the end of the game there is one overriding theme - White's space advantage and better mobility, and how he tries to exploit this.  Not pleasant to endure
in long time control
...
11. bxc4 Qc7  12. Nd2 Bb7 13. e4 Nbd7 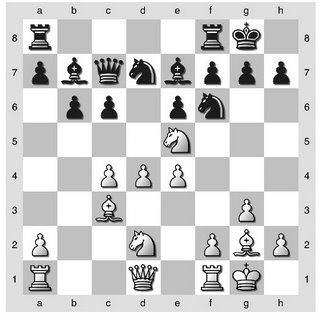 I'm glancing at computer analysis while writing this, but nothing dramatic is going on.  White is simply better.  Compare this diagram to the last and you can see the consequences of poor pawn exchanges - White has several comparable ways to increase the pressure while Black can only hope to exchange pieces and free his game.
14. NxN?!  (Black is one pair of pieces closer to equality) NxN  15. a4 (searching for a new weakness on b6) a5!?
The computer doesn't like this move nearly
as much as ...e5! which it claims leads to equality.  Very non-intuitive for me, but in essence White does not gain from trying to create a passed pawn with 16. d5 because Black is not obliged to exchange but can simply blockade.  While ...a5 may not be the best, I did a rough calculation and convinced myself White could not win the b6 pawn.  This could be true, although a deeper look may question whether defending the b6 pawn should expose me to attacks on the kingside because of White's mobility advantage.  Isn't chess complicated? 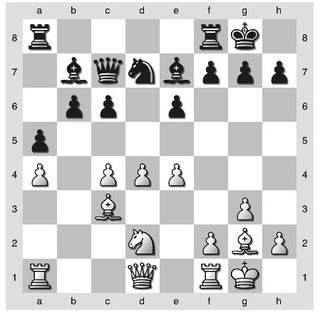 16. Rb1 Ra7 17. f4 Bb4!?
A move I was proud of at the time - I'm prepared to sacrifice a pawn to get Benko gambit-style compensation by pressure down the a- and b-files.  The computer doesn't object yet...
18. Qb3 BxB 19. QxB Ba6
I was surprised my opponent let me exchange another pair of pieces...and yet I may have been better to keep the bishop, as my dark square weaknesses became a problem. 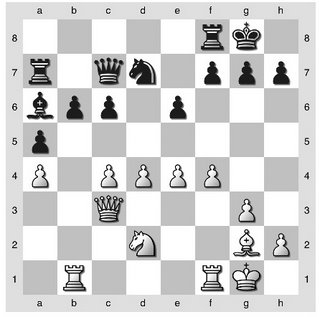 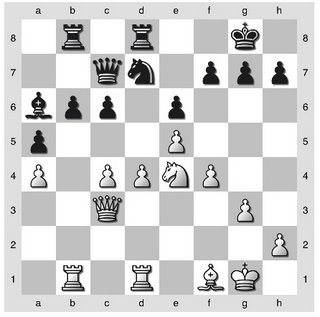 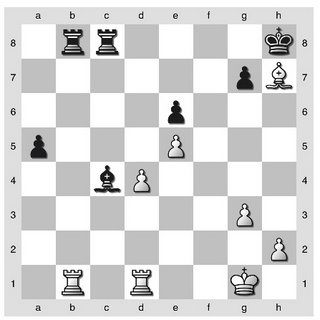 An endgame has arisen that only White can truly hope to win.  However, doing so will not necessarily be easy with his extra pawn being backward and Black having an outside passer.
36. Bc2 Bd5 37. RxR RxR 38. Ra1 Rc8? (better is ...b2, seeking activity for the rook and maintaining the balance) 39. Bg6 Ra8 40. Bc2?! Rc8   Draw agreed on White's request.  1/2-1/2
Despite the fact that the teams were tied, I think my opponent was a bit disappointed and exhausted, the game now being 4 hours old.  I think if he were better rested he would have found a way to squeeze me and improve has advantage to decisive proportions.  As it was, I was proud of myself for holding up under the drawn out pressure of this game, which gave me hope that better games were to come.