And now for something completely different

As opposed to the usual tactical shot, a question of evaluation from Don Carrelli:
In the following position with Black to move, what should be the outcome of the game?  My opinion in the comments... 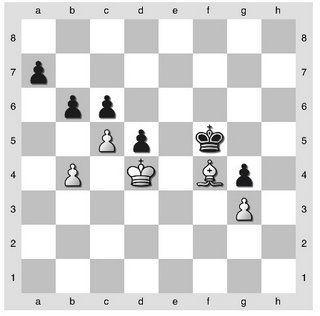 The Director at the Hillside Public Library is in search of a volunteer chess instructor or club manager to offer a chess program this summer. She writes: "Due to limited funds, we are looking for a volunteer, but the schedule could be as often or as infrequent as necessary and we can schedule evenings as well. I can offer you some very interested, responsive kids and great appreciation from the community!" If you are interested in helping out, contact: 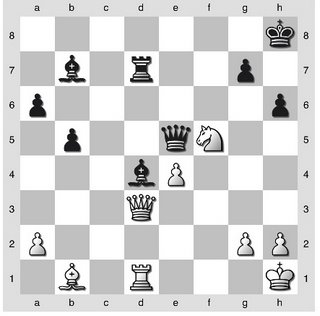 From time to time (and with some help from your opponent) you have a game that confirms your Kasparovian genius, and proves that if you just had a little more time to study then you could be a grandmaster too.  In this recent game, I was inspired by the famous Morphy opera box consultation game to do the first exchange sacrifice I've ever (intentionally) done, and to do it without bothering to calculate the outcome.
1. e4 c5 2. Nf3 Nc6 3. d4 d5?!  (I think this is unsound, but this was a G/45 and any surprise no matter how unsound can prove unpleasant)
4. exd5 Qxd5 (I was trying hard to figure out what traps might be hidden in this opening) 5. Nc3 Qe6+ 6. Be3 PxP 7. NxP NxN 8. QxN Nf6?! +/- (It could be 8...Bd7 already needed to be played.  There have been no tricks in this opening, just Black wasting some time in development.  He is not close to castling.)
9. O-O-O (Simple and probably best) Qd6? (Looking to exchange queens but really just inviting disaster on the d-file) 10. Qa4+ Bd7 11. Bb5 Qc7 (At first I thought 11...BxB 12. QxB+ Qc6 keeps things together, but better is 12. NxB! Qc6 13. Nc7#) 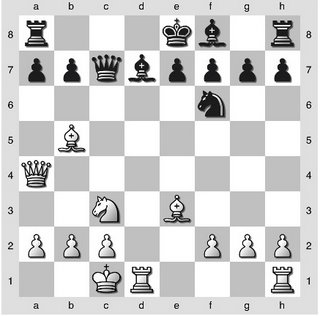 In the following position, after ...Qxa7, can White force a win? 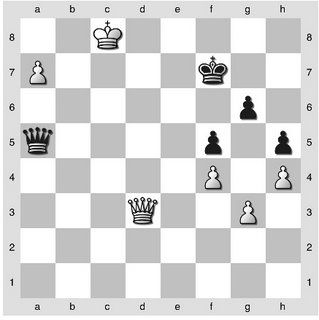 Starts Thursday night, G/60 lasting 3 weeks.  See John Moldovan's excellent Chess Coroner blog for all the info.  It's a rated tournament, so that means that four-digit representation of your worth as a person will be at risk.  But the journey of a thousand miles (to Grandmaster) must start with the first step.
www.kenilworthchessclub.org/chesscoroner/index.html
posted by Ian  # 9:37 PM 0 Comments

How not to play, a lesson in 25 moves

I enjoy playing the White side of the Maroczy bind, very quickly one gets an advantage in space that feels very comforting.  However, there is a risk in getting too comfortable, and in this game this is what I did.  My opponent played a relatively flawless game, taking advantage at all times of my inability to generate a useful attack, so I find this instructive:
1. e4 c5 2. Nf3 g6 3. d4 cxd4 4. Nxd4 Bg7 5. Be3 (c4!?) Nc6 6. c4 Nf6 7. Nc3 O-O 8. Be2 d6 9. O-O Bd7 10. Rc1 NxN 11. BxN Bc6
Typical play in this Maroczy against the Accelerated Dragon, nothing new here.
12. f3 Nd7
the f3 push is by no means unusual and in fact is the most popular move at this point.  However, the stage is already set for a strong knight versus weak bishop scenario as occurs in the game.  A reasonable alternative is 12. Qd3. 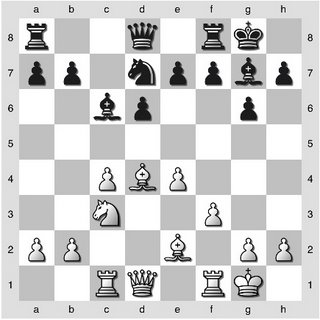 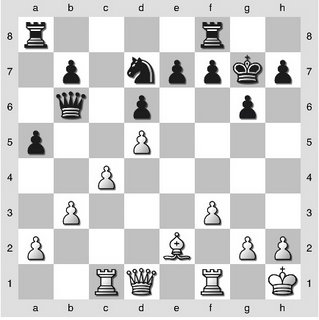 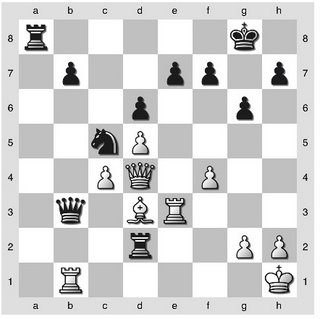 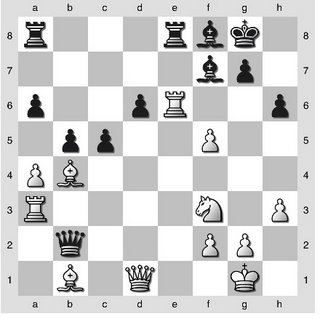 The least motion principle is the Occam's razor of chemistry - basically, the less that atoms have to move in space for a chemical reaction to occur, the more likely that reaction is to happen.  I found myself wondering if the same idea can apply to positional play in chess...the less you have to move your pieces for a given task, the more likely you are to succeed.  Economy of movement is key to attacking chess, but also to positional maneuvering.  Sometimes the weakest response to a threat against a piece or pawn is to move it away from the threat, rather than supporting the piece or even ignoring the threat with a counter threat!
A simple example can be seen below, in 'Parsippany Fight Club Part 2' where ...Nf5! ignores the threat of losing the exchange while threatening mate and the win of a rook.  Or there is the otherworldly example (position above) from game 4 of the Kasparov-Karpov 1990 world championship match, where the Greatest of All Time leaves his rook on e6 hanging for the next eight moves!
On the other hand there are times when needlessly weakening moves are made in response to perceived threats, and it was a series of those I played in an insipid game where I lost on the white side of the Maroczy Bind.   We'll look at this game later this week.
posted by Ian  # 6:54 PM 0 Comments