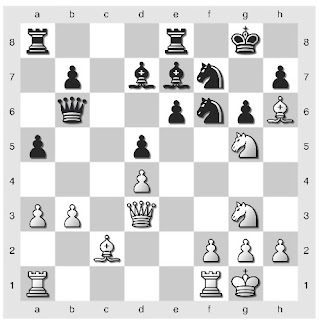 Comments:
It's easy enough to see, sooner or later, that, although White has two pieces hanging, neither can be taken as after Qxg6+ Black loses more material and the game. So Black has to play an interference move. 1....Ne4 suggests itself - but then comes 2. Nxe4, and Black must retake with the pawn (again, after taking wither of the loose pieces on h7 or h6, White can jump in the knight on e4 with check, take on g6 and mate follows). OK, so after 1. Nxh7 Ne4 2. Nxe4 dxe4 3. Qxe4, what has Black accomplished. Well, after 3...e5!!, rather a lot! The interference move ...Ne4 sets up a clearance move, ...e5, which not only clears the third rank so the queen on b6 defends g6, but also opens the diagonal of the light squared bishop. This becomes important if White retreats one of the loose pieces, when ...Bf5! follows with tempo. No, the best line is apparently 4. Qxg6+ QxQ 5. Bxg6 when White is up two pawns and about to win a third though down a piece. Fantastic! Needless to say my opponent did not spot this defense, though if he did I surely would have lost my composure. The computers are the present and future....