In round 12, Anand was in the position of being able to guarantee at least a tie for first with three straight draws. Only Gelfand could catch him and that would require three consecutive wins or an Anand loss. But Gelfand came up with a sparkling win with the Black pieces, meaning there was still all to play for. 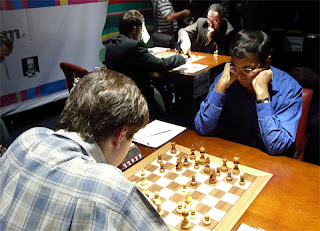 A point ahead of his nearest competitors with 4 rounds to go, Anand could have tried to cruise in with draws but....was facing Morozevich, who probablydoesn't know the meaning of Grandmaster draw. 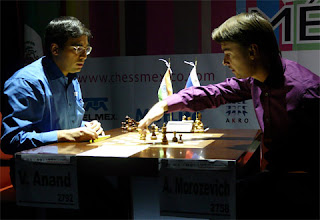 Going into round 10, Kramnik needed a win against Anand to give himself a shot at winning. With 5 rounds left, he and Gelfand trailed by 1.5 points, and Anand was going to have to meet each of them with the Black pieces. A final exam for a potential champion! 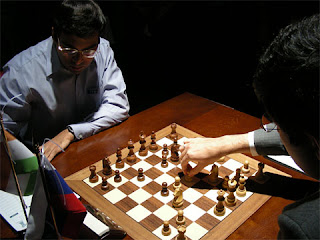 When an irresistible force meets an immovable object...
4 rounds remained, and Gelfand had a matchup with Anand scheduled for the 12th round...a Gelfand win there would throw things into chaos, so Anand looked for something special in round 11....
Anand 6.5
Gelfand 5.5
Kramnik 5.0
Leko 5.0
Aronian 5.0
Grischuk 4.5
Morozevich 4.5
Svidler 4.0
posted by Ian  # 6:01 PM 0 Comments 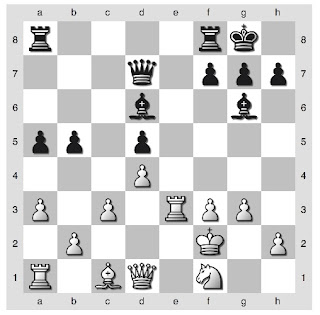 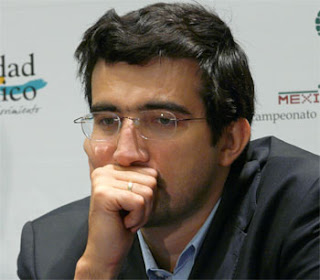 Anand proves more than happy to play both sides of the Ruy Lopez, coming up with another positional gem against an interesting opening idea from Grischuk. 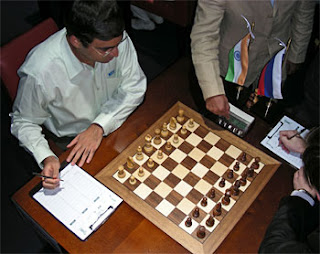 In round 6 Anand played the Black side of the Ruy Lopez, not fearing to use an opening he had just disgraced with the White pieces... 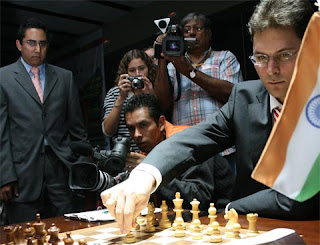 In their season opener for the GSCL, the Karpovs pulled out a tight away match against their Route 22 rivals, Summit. With league MVP Steve Stoyko suffering his first loss in well over a year after a surprise mistake, the pressure was on the lower boards. Max 'the young executioner' Sherer let his man off the hook on board 3 after being two pawns up in an opposite color bishop endgame, so with the match tied at 1.5 each, everything rode on Joe 'The Closer' Demetrick on board 4, with time pressure looming. And then...
As they said, take a bow, son, take a bow.
Fun fact #1: Black scored 3.5/4 in the match
Fun fact #2: Two queens were simultaneously hanging for two moves each on board 2. Caliente!
posted by Ian  # 9:37 AM 0 Comments

Check out the rest of the article to see how chess made its way to Senator Jay Rockefeller of West Virginia. And as the weekend nears, think about introducing chess to someone new!


Additional Info:
S.Res 672 - A resolution designating October 9, 2010, as "National Chess Day" to enhance awareness and encourage students and adults to engage in a game known to enhance critical thinking and problem-solving skills.

In round 4, Anand faced the tournament's resident loose cannon, and interesting play developed.... 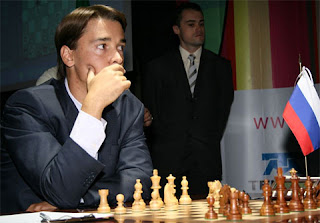 ...should I ask the TD how the horse moves again?
After this near miss, Anand still had the lead, after Kramnik squandered a likewise beautiful position against Grischuk. Aronian bounced back by thrashing Leko.
Anand 2.5
Kramnik 2.5
Aronian 2.0
Gelfand 2.0
Grischuk 2.0
Morozevich 2.0
Leko 1.5
Svidler 1.5
posted by Ian  # 4:28 PM 0 Comments