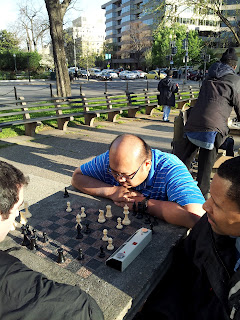 Panchanathan - Stoyko 2012: Pure hedgehog, stewed in its own juices

I happened upon a game from the Dean of Chess Academy Championship, which had GM Magesh Panchanathan vs Kenilworth regular FM Steve Stoyko. Instant classic, which belongs in a textbook. Nothing like disgracing a game like that by having it annotated by an idiot like me. So I paid the inconsequential sum for noted commentator and author Sergey Shipov to travel to Cranford from Moscow and share his thoughts as well.
Shipov: There's a little story, which has Capablanca stealthily letting a hedgehog out of his sleeve onto the chess table; the creature then tells Alekhine, in perfect Russian, "Have atcha!" - and the outcome of the battle was never in doubt.
1. Nf3 c5 (asymmetry! which soon disappears but reappears in different forms...)
2. c4 Nf6
3. g3 b6
4. Bg2 Bb7
5. Nc3 e6
6. O-O a6
The characteristic contours of the Hedgehog start to appear...one can go into incredible depth discussing the pros and cons of various move orders and setups in the openings, and indeed it is Black who must be vigilantly aware of White's many attacking tries in the opening moves. Black's setup takes 10-12 moves to reach its ideal form, in the meantime it can be vulnerable. But these subtleties are out of scope here.
7. d4 cxd4
8. Qxd4 d6
9. Rd1 Qc7 an unusual move at this stage, but nevertheless Black is maneuvering toward the canonical Hedgehog setup. White is pressuring the weak d6 pawn but Black always has sufficient resources if he is careful. Up next is 10. b3 with the threat Ba3 adding a third attacker, however this can be stymied by Black's next move
10. b3 Nbd7
11. Bb2 Be7 (11. Ba3 Nc5 12. b4!? then both ...Ne4 and ....Ncd7 are possible)
12. Rac1 O-O
13. h3
Shipov: A modest move, with three ideas. First, it's important for prophylactic purposes: Black's knight can no longer jump to g4. Second, White's king now has a choice of squares on which he can survive a bloodthirsty middlegame: h1 or h2. And third, White prepares a kingside pawn storm.
13. .... Rfe8!?
Shipov: Wherever White's queen goes, the black rook follows! This rule is easily remembered and put into practice, too. 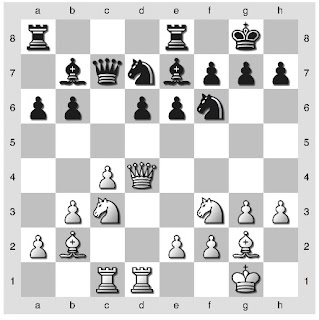 The most natural files for Black's rooks appear to be the d- and c-files (protecting d6 and hitting the half-open c-file). However, this is the Hedgehog and natural, classical concepts are not always ideal. As we will see.
14. e4 Rad8 (....Rac8 was Uhlmann-Ribli 1976, a classic example of the Hedgehog getting crunched)
Shipov: A concrete approach! In this situation, the c-file is not part of the main event. Of course, if Black had, say, a third rook, he would definitely have it on the c-file!
A rook on c8 in the Hedgehog is often there to bring tactical punch to the shot ....b6-b5 (one of innumerable thematic Hedgehog pawn moves, including ...d5, ...e5, ...f5, ...g5 and indeed sometimes ....h5!) But here White's knight on c3 is well defended, so the rook does better to support a ....d5 push.
15. Qe3
Shipov: Uhlmann's patented maneuver! The queen hands over to the knight an ideal central square.
15. .... Qb8
16. Nd4!
Shipov: The knight takes control of the vital squares b5, f5 and e6. As in the Sicilian Defense, this piece plays a major role in White's central strategy. A second favorable element is that it opens a path to the center for the bishop at g2: it will defend the e4-pawn and increase White's control of the d5 square, neutralizing some of Black's active ideas. The only drawback to White's maneuvers is that Black gets time for a comfortable development.
16. .... Bf8 (A key move, clearing the e-file and possibly transferring the bishop to g7)
17. f4 g6!
A continuation of the same plan, forced also by White's pressing pawns - now g3-g4-g5 can be met by ...Nh5. White has fulfilled most of the tenets of classical positional play - space advantage, development, etc....however a single slip has heavy consequences. 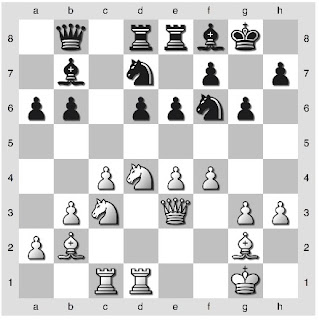 18. Re1? e5!! (Oddly, as simple a move as 18. Kh2 would have spared White his fate and left a tense position on the board)
19. Nf3 d5!
Having said 'A' Black must say 'B' - any other move is bad! Such pawn pushes usually come in pairs in the Hedgehog. One of the factors that makes this system so complex for both sides is that each player must constantly evaluate the consequences of such pawn moves, even if it involves a sacrifice! Here Black takes advantage of superior piece coordination and the unfortunate position of White's queen.
20. fxe5? dxe4
Desperate measures were already required for White. 20. exd5?? loses simply to 20. .... Bc5, however 20. Nxd5!? Bc5 21. Nd4 may have offered some defensive chances because of White's strong center. 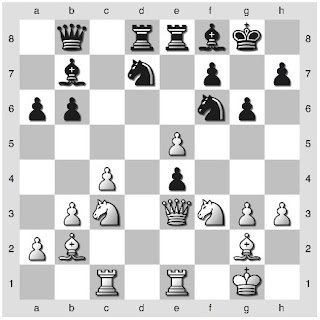 21. Nd4 Nxe5 (21. Nxe4 and Black wins in a variety of ways due to the latent pin on the queen or even king with ...Bc5)
22. Nce2 Nf3+! (The hits keep coming!)
23. Kh1 Nxe1 (apparently ....Nh5 is an improvement, but let's agree this is pretty good)
24. Rxe1 Bg7
25. Rf1 Qe5!
In case there were any doubt, Steve is inspired in this game. This is no drab consolidation, the entire game is characterized by total economy of motion. The queen centralizes, highlighting that the knight is pinned to the bishop. With his next, he shows it is also pinned to the queen. 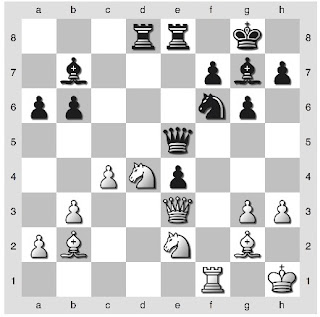 26. Bc3 Qc5
27. Qf4 Re7
28. Qh4? g5!
Kasparov: Such things happen only in co-operative problems!
Desperately seeking activity, the White queen finds itself trapped on an open board. 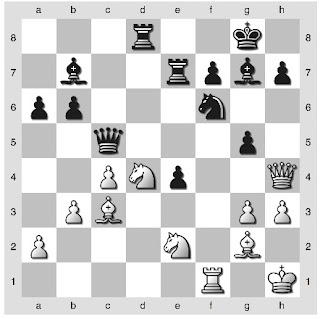 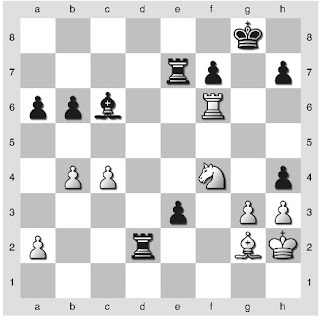