Enough of this drawing nonsense....let's try something better.
posted by Ian  # 6:47 PM 1 Comments

Short's third venture into the Fischer-Sozin (click here to follow along) gave him his best advantage out of the opening yet, as he varied his opening sequence yet again, following this with a stunning, though apparently flawed, queen sacrifice. Uncharacteristically, Kasparov misread the resulting position and found himself in a losing situation. However, Short's time trouble addiction (something that, more than anything else, hampered his performance in the match) made sure that the finish would not be clinical…
1. e4 c5
2. Nf3 d6
3. d4 PxP
4. NxP Nf6
5. Nc3 a6
6. Bc4 e6
7. Bb3 Nbd7
8. f4 Nc5
9. Qf3
A third game, a third 9th move. After trying e5 and f5, Short tries a new plan with 9. Qf3. The basic idea is similar to 9. f5, where a key idea is opening the diagonal of the light-squared bishop. Here the queen supports f5 as well as indirect pressure on f6 in some cases (after Bg5). As we'll see Short had a more revolutionary idea in mind. Notice that Short consistently rejects the quiet lines, such as the perfectly acceptable 9. O-O.
9. …. b5
As in games 6 and 8 Kasparov favors this positioning of the knight, although after this game Kasparov gave up the Nb8-d7-c5 maneuver altogether, having obtained difficult positions in all cases.
10. f5 Bd7
11. fxe6 fxe6 Short's pawn exchange is strategically incorrect, releasing pressure on e6 too early, but it's another question as to whether it is tactically justified…
12. Bg5 Be7
13. O-O-O O-O
14. e5?!
The product of Short's home analysis, though apprently he realized its flaw over the board, which led to an hour-long think that came back to cost him later in the game. Short's idea is the queen sacrifice which he ultimately executes in the game, however the concept could have been refuted. Kasparov: "…the simple 14. … Nd5 15. Bxe7 Nxe7 16. Qg3 d5 leaves Nigel strategically lost because his bishop on b3 is out of play and I can win automatically by advancing my queenside pawns." But Short's uncertainty at the board may have bluffed Kasparov into thinking the loss of a queen had simply been missed during analysis.
14. … Nfe4? (….Nd5! See above)
15. Bxe7 Qxe7 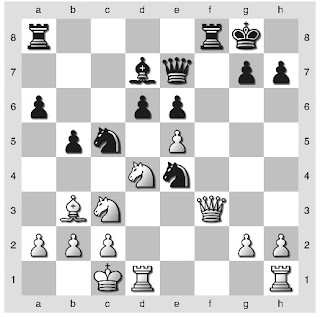