In which an old dog learns new tricks...

I dropped by Hamilton for one of their monthly quads for the first time in a year this weekend (last time I was very rudely treated with an 0-3 score). It helped shake the rust off for the upcoming USATE, but 10 or so straight hours of chess left me in full brain melt by the end. In my last game at varying times my opponent and I each thought we had won a piece from the other, and in a time scramble I won even though analysis after the game proved I was busted. Luckily my opponents were suffering from the same effects, and I acquitted myself well with a 1-1-1 score line in a quad of my peers. As often happens I got very good positions but...the higher you go the more the level of resistance, and the harder the accumulation of small advantages...the next breakthrough will take a qualitative leap in understanding.
Incidentally, I heard our talismanic master Mark Kernighan was in a car accident on the way to Hamilton, I hope the eternal flame of our club is uninjured and doing well.
On to happier things.... I won a game against Glen Hart in round 2 of the KCC club championship, though as always not without adventures. An unusual opening turned into an example of alternating color complex domination. Glen had white and is a good attacking player, but I was ready to play a Najdorf or Sveshnikov, or a King's Indian to meet iron with iron.
1. Nc3 Having played a lot of games the last few years I was surprised to be sent into a think on move 1. I've got no book on this move.
1. .... d5
2. e4 dxe
3. Nxe4 Is this an invitation to a Caro-Kann? Probably just off-the-cuff inspiration.
3. ..... Nf6
4. NxN gxN WWYD (What would Yaacov do? Take with g-pawn and bust you)
5. Bc4! else ....Bf5 is my next move. Already White has ideas of Qh5. Time to think some more. I think we used a total of an hour on the first 10 moves. Good stuff.
5. .... Nc6
6. Qh5 (played anyway!) Ne5
7. Be2? And now a mistake, whereas 7. Bb3 is optically dangerous after 7....Bg4 but the queen can't be trapped and Black still has a weaker structure, though it's easy to say that after the fact.
7. .... Qd5! And this is exactly the square Yaacov saves for his queen in the Caro-Kann, now g2 remains a target for the rest of the game. 8. Nf3 is bad because of 8.....Bg4, so White has problems. 8. f3?? gets hit with ....Nd3+. 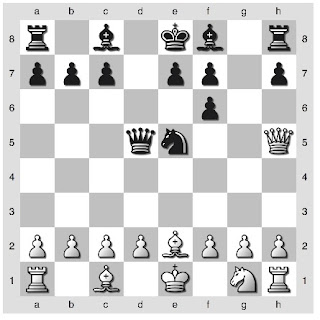 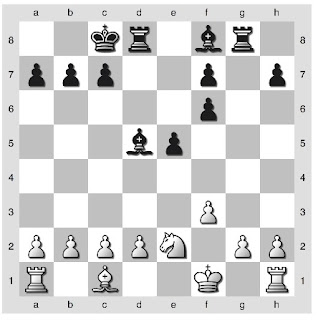 Ted's Not So Excellent Adventure

The Kenilworth Karpovs kept up their punishing pace of victories with a 3.5-0.5 victory at the KCC last night over the DOCA Knights. Pancakes were served shortly after the match. Video footage and interviews here.
posted by Ian  # 7:20 AM 1 Comments