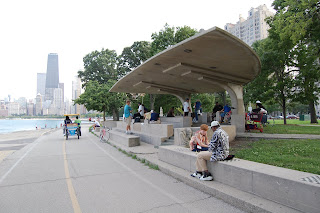 After my grueling Inter Service Chess Championship performance, I got the chance to hit the Chicago chess scene. Flanked by one of the great lakes and the Hancock Observatory, the scene was picturesque. The Chess Pavilion is located right off of Lakefront Trail. There was a constant flow of people playing and watching.

Here is a shot of one of my games against an energetic fellow which reminded me of one of Alekhine's games. The park had some good players, so unless you know what you are doing, be prepared to drop a couple bucks!

The 2010 U.S. Interservice Chess Championship concluded this week, with Don Carrelli playing Arthur Macaspac in the penultimate round.  It was an unfortunate opening choice for Don (why not the Left Hook Grand Prix, man?) and it was not a good tournament for him overall. But this game did give Arthur the chance to demonstrate how important it is to use your King in Queen and pawn endings.

Macaspac is both the reigning Army Champion and the Kenilworth Chess Club champion.  He has won the Army title three times.  Based on his performance in the tournament, Macaspac should have placed very well.  I have not seen a definite account of the final standings yet, however, to say whether or not he will be playing in the NATO championship (for which this tournament is the qualifier).  If anyone has a link to final standings, please post a reply here and I can update this post.


Arthur also won his final round game.  For the second time in the tournament, he managed to force mate in the ending -- this time with Knight, King and Rook attacking his opponent's King.